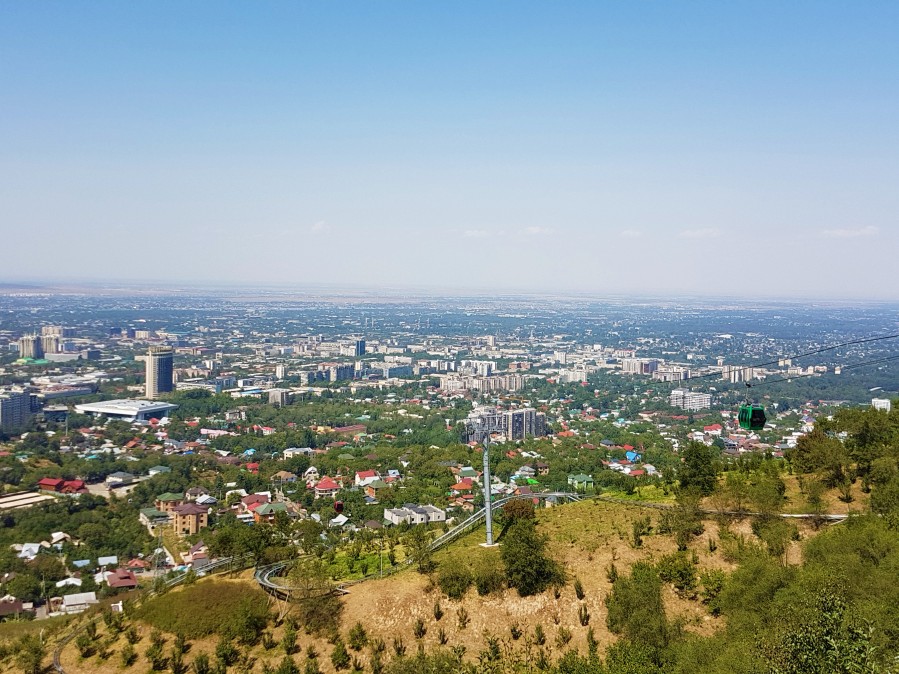 Almaty is Kazakhstan’s largest city and was the former capital city from 1991 until 1997 when it moved to Astana. At just over 2 million people living in the city it remains the commercial and business centre of the nation. Right at the foot of the Tian Shan Mountains, this older more Soviet looking city is surprisingly cosmopolitan. A vibrant nightlife with an international dining scene, cafes, pubs and clubs and pedestrian malls are just part of the highlights of this city.

Almaty has changed its name twice since its founding in 1854. From Vernity to Alma-Ata in 1921 and then from Alma-Ata to Almaty in 1993. The city was initially founded as a Russian Fort to defend the Empire. It grew into a town and then into a city.

In 1921 the name changed to Alma-Ata, a Russian name meaning “father of apples” referring to the abundance of apple trees in the region. When the Kazakh Soviet Socialist Republic was established in 1936, Alma-Ata was made the capital city. In 1991 when the Kazakh Soviet Republic transitioned into an independent nation, Alma-Ata remained the capital city.

In 1993, two years after independence the city went through a final name change to Almaty, which is the Kazakh language equivalent of Alma-Ata.

25kms from the City centre lies Kazakhstan’s very own Switzerland. The Shymbulak Mountain Resort is the largest ski resort in Central Asia and when you visit during the summer months like I did you get to enjoy the same resort vibe but without the cold! You take a cable car to the main resort area and here you’ll find a nice souvenir shop, a few cafes and restaurants and an arcade/entertainment centre.

What I found of particular interest where the wooden chalets you can walk by. These mountain lodges were actually nothing like I expected to find in Kazakhstan so they were quite a nice surprise.

This was part of our sightseeing tour but you can get a taxi or bus to here from the city. You can take a cable car up to the main resort area from Medeu Base and you can go even further up in another, separately priced cable car (although we did not choose this option).

There seems to be a range of activities available according to the Shymbulak website but their English translated site is still being developed at time of writing.

If you are looking for a place to get a view of the city then this is the place. Favoured by locals and visitors, Kok Tobe, which means green pasture, provides a panoramic vista of the city and the mountains. It is a part amusement park and recreational area with some small walking trails nearby, rollercoasters, ferris wheels, a variety of casual restaurants and some bizarre attractions – like a monument to the Beatles and an upside down house because… well… why not? The hill can be reached by another cable car from downtown Almaty.  At a cost of 2000 Tenges return trip (AU$8 approx) it is an economical and fun highlight of the city where you can rub shoulders with locals.

Almaty is filled with green parks but this one has three major points of interest and is close to the Grand Bazaar as well.

The Ascension Cathedral or Zenkov Cathedral is one of the main cathedrals in the city. Completed in 1907, the cathedral is made completely out of wood yet without the use of one single nail!  During Soviet Times, a museum was housed here and in 1995 the cathedral was returned to the Russian Orthodox Church. Unfortunately, while we were there it was going through some restoration efforts so enjoy the scaffolding photo.

The War Monument is a striking and imposing site. The central figure of a soldier defending the 15 republics of the Soviet Union stands directly opposite an eternal flame dedicated to the soldiers that perished in the Civil War (1917-1922) and World War 2.

Also in the park is the Kazakh Museum of Folk Musical Instruments where you can learn more about Kazakh folk music and has over 1000 instruments.

A trip to the central marketplace, just down the road from Panfilovet’s Park, gives you more insight into the everyday life in Almaty. Locals come here for spices, plants, flowers, seeds, food and meat including horse meat. Interestingly, despite Kazakhstan being predominantly Muslim, pork is available but must be kept separate from the rest of the meats available.

Just outside the main marketplace is a number of souvenir stores and a chocolate store where you can try some Kazakh chocolate. Trust me it is good and is wrapped in a beautiful wrapping similar to the turquoise blue of the Kazakh flag. It makes an excellent souvenir.

And that brings a close to my time in Almaty and my time in Kazakhstan. This is a very large country with some remote and remarkable places in Nur-Sultan, Almaty and other regions that I haven’t mentioned or visited. I am very looking forward to going back one day. Until then, a big thank you to our Kazakh guide, Gaukhar, for her passion, friendship and professionalism. Don’t forget to check out her instagram @dossova (and mine while you’re at it @mauriarlegui) and her own tour company, FriendlyTours for some jaw dropping Kazakhstan travel inspiration.
Saw boliniz!

Almaty is usually more visited than Astana. Have you visited either or any part of Kazakhstan? Let me know below.
If you want more travel stories or inspo don’t forget to subscribe and/or follow me on instagram @my100by40.