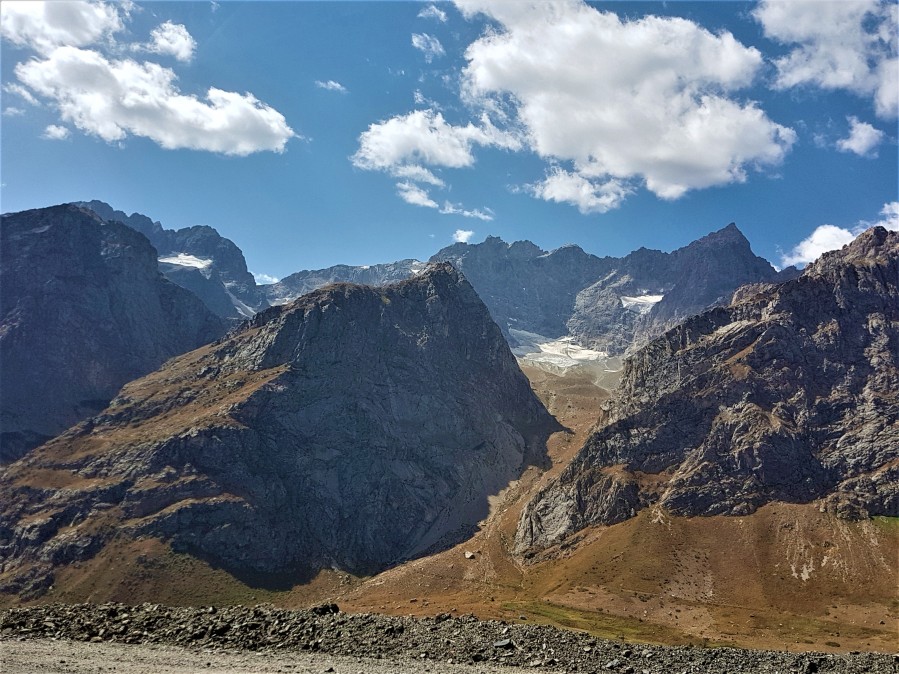 Salom!!
Welcome to Tajikistan, for days 8 and 9 of my Central Asian adventure.
For this leg of the journey, I explored the capital city of Dushanbe and then drove through the Fann Mountains. The latter is considered a “must” when visiting Tajikistan.

When I told my friends and family this was a country I was travelling to they had no idea what I was talking about. After sharing photos of Tajikistan it had many of them asking how to get there.

It also has a special place in my heart. Tajikistan was country number 49 for me, and with there being 195 sovereign states in the world, it means I had traveled to 25% of the world’s countries at that time! An incredible feat for myself. To keep the peace some people say 196 countries, some say 200, but let’s leave that argument for another time, I just went off the UN’s official number of countries.

Tajikistan’s history is closely aligned with Persia. In fact, the Tajik language is a slight variation of Persian.

The lands of modern-day Tajikistan was also fought over and won by many different Empires. Of particular significance was the Empire of Samanid – a large and powerful Central Asian state which is said to be the foundation of the modern Tajik nation.

Before Russia conquered the region in 1864, the area belonged to the Emirate of Bukhara, a powerful Uzbek State. For this reason, when the Soviet Union was formed and the Soviet Republics were created Tajikistan became an autonomous region of the Uzbekistan Soviet Republic. Finally, it separated in 1929 to become a full republic of the Soviet Union. Interestingly, the Tajik cities of Bukhara and Samarkand, where all the tourists go, were left in Uzbekistan.

9 September 1991, Tajikistan declared its independence from the crumbling Soviet Union.

Independence wasn’t easy for Tajikistan. Already struggling with a poor economy, it fell almost immediately into a civil war which completely devastated the country. Several factions, determined by historic clan loyalties in the east, disputed the first elections of independent Tajikstan.

Eventually, Emomali Rahmon was elected as head of government and he managed to negotiate peace within Tajikistan in 1997 and created the Autonomous Region of Gorno-Badakhshan, ending the war. President Rahmon, having helped make peace possible, is extremely popular in Tajikistan, winning several re-election campaigns and he’s been in power since 1994.

How: Mid-morning Air Astana flight from Almaty International Airport (Kazakhstan) – Dushanbe International Airport. Again, the service on this flight was impeccable with alcohol available for purchase. Not much to see or do at Almaty Airport – in fact there aren’t many places to eat either. Tajikistan is also 1 hour behind Kazakhstan following the GMT+5 timezone. Tajikistan’s national airline, Tajik Air, has flights to several places in Russia, Samarkand, Uzbekistan and even India.

Accommodation: Dushanbe: Hilton Dushanbe (formerly the Sheraton) – a piece of elegant luxury in the heart of the capital city. Worth it for comfortable rooms, a delicious breakfast and all the comforts you expect from the Hilton.
Penjikent: Hotel Umarion – Basic accommodation including hard beds, leaky showers but a hot breakfast. This was mainly used as a base to explore the nearby Seven Lakes.
Khujand: Grand Hotel Khujand – huge room, right in the centre of town. Restaurants, markets, grocery stores, parks and a post office all within walking distance.

Visa: Yes. You can apply for an e-Visa here and pay US$50. I got the e-Visa the next day after submitting the form and paying the fee. E-Visa gets sent to your email so print it out and make sure to bring it with you as they will be checking it and it lasts 45 days. For a bit of fun your Tajik e-Visa includes an emoji on the visa reminding you to exit the country before your visa expires.

Dushanbe is the capital and largest city of Tajikistan with just over 1 million people living in the metropolitan region. The name means Monday in the Tajik language and is so called because the city grew from a small village where a popular market used to be held on Mondays. I didn’t know what to expect from this city, knowing very little about it, but I was actually pleasantly surprised with this city in general, the sights, its people and my experiences exploring.

We met our new local guide, Farhad, who along with out trip leader Mirza was going to help us travel through Tajikistan nice and smoothly.

To be honest, upon exiting the airport, I think I experienced my first culture shock.  All I knew about Tajikistan was that it was a country (already beating a lot of the people I know) which used to be part of the Soviet Union. I did not expect it to have such a Middle Eastern feel to it.

Also, when we went to the Botanic Gardens I noticed all the locals stopping and staring at us. At first, I thought, given that it was 35 degrees and we were wearing shorts that maybe we were dressing inappropriately and were insulting them. About 5 minutes later I realised that nothing could be further from the truth. The Tajik people are very friendly in nature and were so thankful and curious to see a group of tourists visiting their country that they just wanted to stop to say hello and have a chat to practice their English. Also, we became the tourist attraction at this park with a few locals, and even brides and grooms getting married at the park asked to have photos with us.

Dushanbe is an excellent place to start your Tajikistan adventure. Although you will need to come here to do the really exciting stuff you can do in Tajikistan, the city itself it is definitely worth visiting if you have a day or two to spare.

Flagpole Square:
At 165m, this Flagpole was the tallest in the world from 2011 until 2014. It was built to celebrate the 20th anniversary of independence and is surrounded by a man-made lake. Around the other side of the lake is a mini version of a statue of Ismail Samani and the National Museum of Tajikistan where you can learn about all things Tajikistan from nature, history, culture and arts. We were unfortunately unable to visit this museum due to our flight being delayed.

Rudaki Park:
Just down the road from the flagpole lies Rudaki Park, dedicated to the great Persian Poet whose works are widely celebrated in Tajikistan and who is considered to be the first great poet of the modern Persian language. 1.3 Million verses are attributed to him.

Statue of Ismail Samani:
Directly across the road from Rudaki Park is the icon of Dushanbe; the gold covered statue of Ismail Samani. This was built to commemorate the 1100th anniversary of the Samanid state.   He was the Emir of the Samanid Empire between 892 and 907AD and made the Empire a powerful force. Largely considered to be the father of the Tajik nation, the modern-day Tajik currency, Somoni, is named after him.

As a tip, head there in the morning so the sun is facing the statue and you can see it in its full golden glory. Otherwise, in the afternoon the sun sets behind the statue.

Navruz Palace:
The Navruz Palace is a lavish, upscale event venue used for weddings, celebrations and government meetings. It is impeccably well designed, each room crafted a different way with wooden carvings, mosaics, blinding lighting and reflective rooms. It’s worth getting a guide to go in (about 25 Somoni at time of writing).

After our night in Dushanbe we began Day 9 of the trip and were feeling energetic and excited for the next adventure. The few blogs out there on Tajikistan will tell you that the Fann Mountains are a must visit when travelling through Tajikistan. I am going to have to agree. Our group of 8 split into two groups of 4 to get into two small vans as opposed to big buses because the roads we are about to use.. well… I would definitely not want to be in anything bigger than a mini van.

As you drive through the winding and occasionally nerve-racking roads of the Fann Mountains, the scenery is so dramatic, so exotic, so other worldly that you can’t help but be left awestruck. No rolling green Windows PC hills here. This is rugged, rocky, jagged mountains with some glaciers hidden in behind them as well. The roads sometimes veered on the edge but with the skills of our expert driver, Mr Jobir, we never felt unsafe.

Also as a side note, services in Tajikistan aren’t amazing. There were several times where we took one look at the bathroom and decided to find a tree instead. Even the ladies of the tour opted for this. Part of the fun of travelling!

Eventually, we got to our destination – Iskander Kul – a beautiful alpine lake fed from nearby glaciers. Surrounded by mountains it was a perfect setting for lunch which we thoroughly enjoyed. Tajikistan doesn’t have many tourists so it felt like the place was just for us. The 8 of us were the only tourists in sight. The whole place to ourselves. This is the beauty of travelling to Tajikistan. Cue all the insta shots!

After lunch on the shores of the lake we went in search of the ‘Niagara Falls of the Fann Mountains’, aptly named Iskander Waterfall. To compare the actual waterfall to Niagara Falls will leave you disappointed. It is very much smaller and you can’t take that great of a photo of it due to its position in the mountains. However, you can stand on top of a viewing platform as the waterfall thunders under your feet.

The hike there is flat, relatively easy, you may have to climb over a rock once, but takes about 30 minutes at a leisurely pace through some breathtaking and jaw dropping scenery. It is on an unsealed path but it is very hard to get lost. The hike back is slightly uphill.

After our adventures in Iskanderkul we continued driving to Penjikent. We stopped at a small mountain village for snacks and soft drinks cooled by glacial water (and cheap, too, at AU$0.80).

Food in Tajikistan, at least the food we tried is, again, heavily meat focused with kebab-skewer-style meat served with vegetables and rice. And watermelon for dessert – lots and lots of watermelon!

Not convinced about visiting Tajikistan yet? Wait ’til you see what’s next!
Or maybe you are? Let me know!
If you want more travel stories and inspo don’t forget to subscribe and/or follow me on instagram @my100by40.