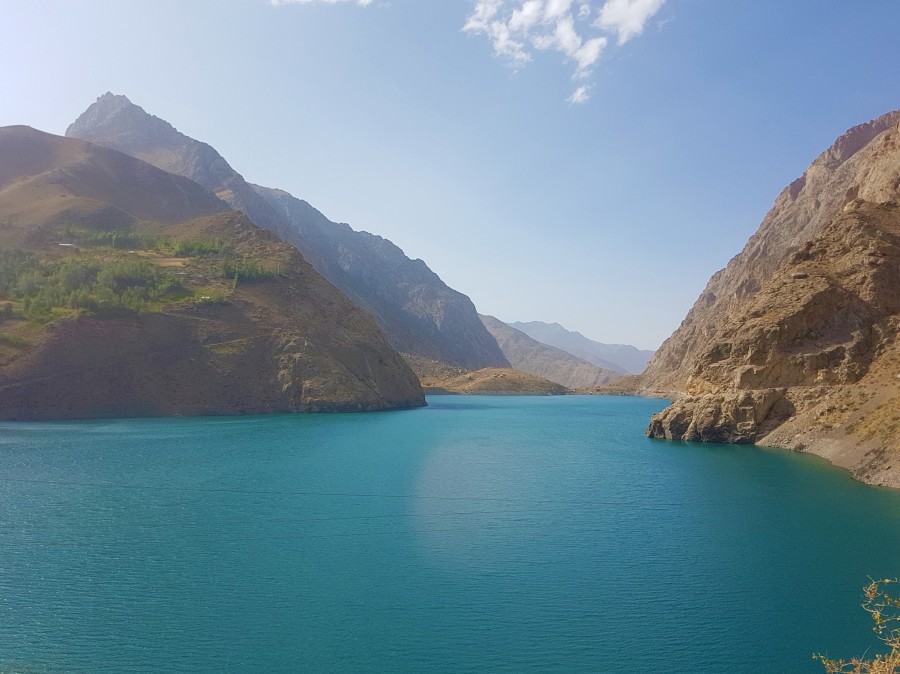 Tajikistan is a land of such pronounced beauty it is a wonder why tourists are not flocking to this country. This part of the trip is day 10 – 12 and will focus on the Seven Lakes district, which has some seriously stunning lakes that may rival those of the Canadian Rockies, before finishing in Khujand, Tajikistan’s second largest city.

After an overnight in Panjakent we were off in our mini vans to see the Seven Lakes. Now, there are a number of ways you can visit them. You can hike them all, staying at some guest houses along the way or, given the limited time we had, you can do what we did – drive through some terribly rocky roads and tight corners (seriously all praise Mr Jobir, our driver, for navigating that) and then hike from the 6th lake to the 7th lake. Either way you are never going to miss out on the beauty that are these gorgeous lakes. Oh, and you can swim in each and every one of them but the water temperature does get cooler as you get higher and higher into the mountains.

Each lake has a name as the legends dictates the lakes are the tears of seven daughters who lost their father in the mountains. To burst your bubble, in actuality an earthquake caused a rockslide, which made the water dam and formed the lakes.

Could I choose a favourite?

The first lake will always be special as that was the original one, the first one we saw and I still remember gasping as I saw the beautiful blue colour of it.

The sixth for its sheer size and gorgeous back drop…

… And the seventh. I can’t really put into the words the special feeling I got when I arrived to the seventh lake. It is like an achievement just to get there; like the mountains were saving the best for last. It feels so special, so peaceful and serene, a place for pure and total personal reflection. Truly isolated high in the mountains, where no roads lead. In fact just beyond this lake, further into the mountains, people live there and we saw a few of them taking supplies as they stock up in preparation for the upcoming winter where they become completely isolated and cut off from the rest of the world.

This setting of pure natural beauty is something that you really should witness for yourself.

Ok… so maybe the seventh one is my favourite. But definitely come here to decide for yourself.

After hiking visiting the Seven Lakes we returned to Panjakent to freshen up and for dinner. Within walking distance of the hotel we went to a restaurant where they gave us a private room. The reason why I am bringing this up is because a very special moment happened here for me. Up to this point, alcohol was always available but it was mainly beer. I’m not a big beer drinker myself and hadn’t had a glass of red wine since Nur-Sultan on day 1. Devastating, I know. I was beginning to get the shakes.

Thankfully, this restaurant stocked some red wine from Moldova. I can honestly say, living in Australia, I have never sampled Moldovan wine. And I can honestly say now, after sampling a few glasses, a trip to the Moldovan wineries is very high on my bucket list! Anyone reading this who has been/wants to go to Moldova for the wineries let me know. My friends aren’t really wine drinkers, unless you count Moscato as a wine (no it is not a wine).

Our last stop in Tajikistan was the hometown of Farhad (our guide), Khujand. Close to the Tajik-Uzbek border, Khujand is Tajikistan’s second largest city, and the capital city of the Tajikistan’s northern province, Sughd. One of my favourite moments on this whole trip was going to the Kamoli Khujand park after dinner on our first evening for an orientation walk.

We were met with locals from all over town enjoying the warm evening. A marketplace was set up, water fountains were performing a small light show, local Tajik music blasting all through speakers, children playing – just an all round great atmosphere. Again, being tourists in a seldom-visited country, we became a star attraction with a few families asking to take photos with us.

Of particular interest in the city is the Khujand Fortress, which played a central role in the history of the city including during the Silk Road. The fortress also houses the Historical Museum of Seguhd. This museum is very much worthwhile visiting to get an understanding of this region’s significance from the times of Alexander the Great to the Silk Road, the Mongol Empire all the way through to independence and the Tajik Civil War. There are captions in English but you will definitely get more out of it getting a guide to explain in detail. Entrance is about 15 Tajik Somonis (AU$2.30).

Other interesting sites in Khujand is Masjidi Jami Mosque that is connected to the Panshambe Grand Bazaar by a huge square filled with locals enjoying the sunshine. The Bazaar is two levels, has several entrances and exits and you can find everything here: spices, food, toys, cameras, colognes, electronics…

With that brings my time in Tajikistan to a close. It truly is a glorious country with extremely friendly, hospitable people and stunning scenery. Although the least developed nation of the Five Stans, this fact should not deter you from visiting and seeking out a true adventure, as these places just begging to be discovered.

The journey through Central Asia is not over yet. Next we walk on over to Uzbekistan.

So what say you about Tajikistan? I’ll be curious to hear your thoughts below.
For some more travel stories and inspiration don’t forget to subscribe and/or follow my instagram @my100by40.