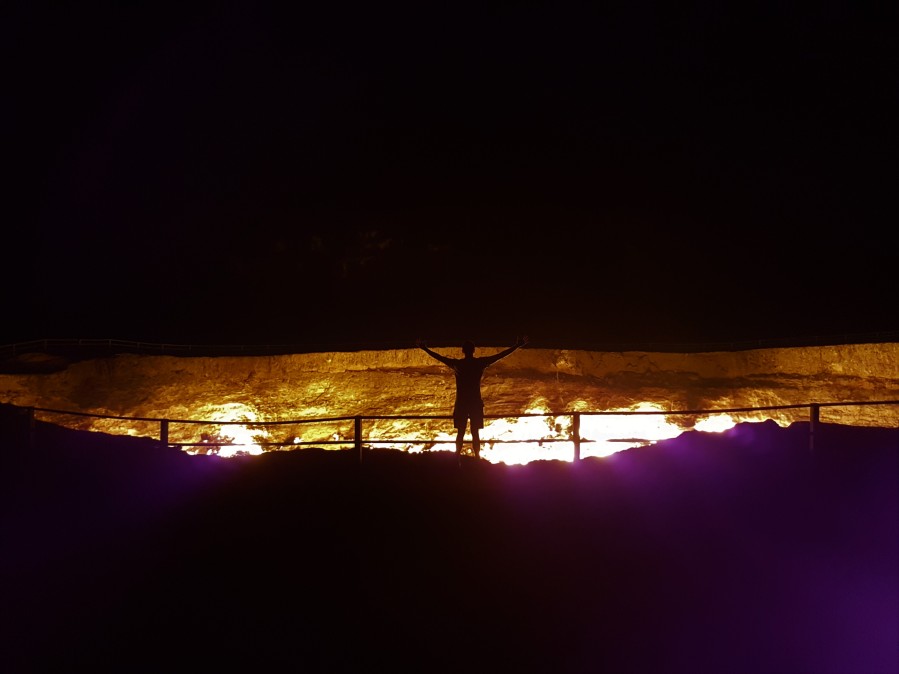 The fifth and final Stan of my trip through Central Asia was Turkmenistan. Notoriously known as being closed, reclusive and politically isolated, there was a sense of accomplishment as my passport got stamped with a Turkmen entry stamp. The country is the eleventh least visited nation in the world, probably because of its strict entry requirements – expensive visas and the requirement to be in an organised tour group.

Saving this stan for last was like we were saving something special for the finale. It was fascinatingly weird and noticeably remote with the very out of place, Las Vegas like, Ashgabat, as its capital city.

Important to note: when I was in Turkmenistan, all forms of social media were blocked. Facebook, Instagram, Snap Chat, Hotmail/Outlook, WhatsApp and Twitter were all inaccessible. For this reason it is recommended to download a VPN to access these sites. It does work and in case you forget to do it beforehand I was able to download a VPN using the wifi network of the hotel I stayed at in Ashgabat.

Turkmenistan’s history starts around 500BC before it became under the rule of several Persian states and even Alexander the Great. Then came the Mongols in the 13th Century and the Timurid Empire in the 14th Century with disastrous results for the state. Eventually, this led Turkmenistan to become a land of sparsely populated tribes under the control of Iran and the Khanates of Khiva and Bukhara.

Union of the lands did not come until the Russians invaded in 1869 and incorporated it into the Russian Empire. The Turkmen Soviet Socialist Republic was created in 1924 making it one of the fifteen republics of the Soviet Union.

On the 27th October 1991 Turkmenistan declared independence. The leader of the Turkmen Soviet Republic, Niyazov, assumed the presidency of newly independent Turkmenistan. Communism was replaced by Niyazov’s dictatorship and ‘cult of personality’. Niyazov was also declared President for Life by a parliament filled with members hand picked by himself.

In 2001, Niyazov wrote a book, Ruhnama, whose purpose was to provide spiritual guidance for all Turkmen. This became mandatory reading in schools, universities, for government employees and even for anyone who wanted to pass a driving test. Niyazov had claimed that those Turkmen students who read it three times would automatically get into heaven. You can still purchase this book in Turkmenistan and it has been translated into 41 languages including English… in case you’re interested.

In 2006, Niyazov died leading to a complete power vacuum as there was never a mention of a successor. His Vice President, Berdimukhamedov, assumed the role of acting president and has since won two elections with nearly 98% of the votes. So he is either really popular or… you know. He has opened up the country slightly by removing some restrictions Niyazov had in place including the banning of the opera and circus. However, Turkmenistan remains reclusive, closed, a human rights violator and a dictatorship.

According to Human Rights Watch, Turkmenistan still remains an oppressive state with government restrictions on all aspects of daily life for the Turkmen citizens.

How: On foot via a land crossing in Shavat, Uzbekistan and Dashoguz, Turkmenistan.
Turkish Airlines connect Ashgabat with Istanbul and therefore Europe.
Fly Dubai, a government owned budget airline of the United Arab Emirates, connects Turkmenistan with Dubai and therefore Asia and Australia.

Visa: Yes. Citizens of every country in the world need a visa to enter Turkmenistan. To get a tourist visa you will need to book a tour through a Turkmen based tour agency and receive an official letter of invitation. I booked my tour through Kalpak Travel and we were the first tour group where ever single one of us got pre-approval to enter Turkmenistan.
If you have a Turkmen embassy in your country you can take it there to receive your visa. Otherwise, with your letter of invitation visas are available on arrival at Ashgabat airport and through some land borders. The price varies, mine at the Dashoguz land border cost US$75, payable in cash, with a group invitation.

… But first… the border crossing

After our two nights in Khiva, Uzbekistan we had to say goodbye to our Trip Leader, Mirza who was heading back to Tashkent. We met a new driver and guide, the latter of which was actually our server at one of the restaurants we ate at in Khiva, whose sole purpose was to drive us to the border crossing with Turkmenistan. The drive, of about an hour long was fine but the 10 of us in the car were admittedly nervous not knowing what to expect.

We arrived at the Shavat – Dashoguz border crossing. The border opens at 9am and we got there just after 9am so we were the first in line. We bid farewell to our new guide. Now the 10 of us were alone. To exit Uzbekistan and enter Turkmenistan was a journey in itself with a number of stages.
Stage 1 – Uzbekistan: Passport check and bag scanning. Standard formality.
Stage 2 – Uzbekistan: Immigration control. We were the first in line but the process was still slow. About 2 – 3 minutes per person. Throughout our stay in Uzbekistan each hotel we stayed at provided us with little hotel slips confirming our stay there. The intention was to keep these and hand them over when we left Uzbekistan. However, they did not even look at these slips.
Stage 3 – Uzbekistan: A short walk and then another passport check to check, I assume, that we did not swap identities in between each checkpoint. Officially out of Uzbekistan.
Stage 4- No Man’s Land: An approximately 400m walk of just nothing. Walking until we basically got to something. Except, what looked like a graveyard on the other side of the fence….?
Stage 5 – No Man’s Land: Turkmen guards checked that we had valid passports and a valid letter of invitation. To be honest, these Turkmen guards were actually really friendly.
Stage 6 – The Drive to Turkmenistan: At this crossing there is a mandatory shuttle ride you take from this first checkpoint until the actual border. The 10 of us, each with a piece of luggage plus a carry on (plus additional souvenir bags) had to squeeze in to a minivan. The cost, per shuttle, is US$1 plus US$1 for the bags – again payable in cash.

Stage 7 – Turkmenistan border: We got off at a building where we were told to fill in a customs declaration form. Then, waiting and more waiting and more waiting. Until we were next in line. However, the guards didn’t really want to deal with all 10 of us. The official wanted one person listed in our invitation letter act as the go between. All thanks to Morten for taking this important task onboard.
After a while, Morten came back to collect the money for the visa. US$75 it cost me – ensure you have clean, new bills and exact change is better. Then one by one we were called up to get our visa.
The border officer was super friendly even wishing us a genuine “Welcome to Turkmenistan and enjoy your stay”. Alas, I had a Turkmenistan visa in my passport! The visa takes up a full page which, makes it a very noticeable visa from a very unknown country in your passport – a point I didn’t even realise until I tried to enter the USA at Miami International Airport, the following year, and the guard asked me a lot of questions (spoiler: I was let into the USA).
And yet I was still not in Turkmenistan…
Stage 8 – Turkmenistan: Bag and body scanner
Stage 9 – Turkmenistan: Surrendering our customs form to a panel of three individuals who asked a few of us to open our luggage in front of them. But again, they were super friendly and even asked me about the Sydney Olympics.
Stage 10 – Turkmenistan: Visa check…. even though we were in the same building.
Stage 11 – Turkmenistan: A long walk of almost 500m to a gate where there was one final passport check from another friendly officer… honestly why was I so worried? And then finally after 2.5 hours….

Once in Turkmenistan we met our new Turkmen guide, Tachmurad, and the group had to split into four 4WD cars as we were driving to the Gates of Hell….
I got into the 4WD with my travel buddy, Christine and the friendliest American I’ve ever met, Bill. Not gonna lie, we totally had the best driver. Atta was shy at first and said he didn’t speak much English.
Wrong.
We were having the best conversations with him, laughing, joking, asking about Turkmenistan and then with his killer playlist of classic hits from the 70’s to 00’s we had a mad sing along. Look out the Voice Central Asia!

The Gates of Hell… hmhmmwhahahahaha!

The Gates of Hell, the Gates to Hell, the Entrance to Hell. There are many names to this site but the official name is the Darvaza Gas Crater. In 1971 a natural gas field collapsed in the Turkmen Soviet Socialist Republic. To prevent the spread of the gas, geologists lit the field thinking it will burn itself out in a matter of weeks. 49 years later and it is still burning.

One cannot accurately put into the words the intensity of the heat that the fire was throwing. Every so often the winds would pick up and throw the heat your way. That is a feeling, a heat, I won’t ever forget. A new feature while we were there was the safety fence, which as our guide told us, wasn’t there a few weeks back.

Now you’re here. You’ve got this far. Do not be ashamed to take all the insta shots you want. Whether it be pretending to fall in… or my personal favourite a world domination pose.

Anyone who knows me and my travel style will tell you I just don’t do camping. Like my idea of camping is a 3 star hotel with no room service. But, I was not going to pass on an opportunity to camp under a million stars, with the Darvaza Gas Crater burning nearby, deep in the Karakum Desert of the ultra reclusive state of Turkmenistan. I personally don’t know many people who can say that.

Full disclosure. I did not have to set up my tent nor did I have to cook. If all camping adventures from now on involve me admiring stunning landscapes while someone else sets up camp for me, cooks and clean then sign me up………….. As long as we are 100% sure there isn’t a Hilton nearby – old habits die hard.

The night was windy and it wasn’t an amazing sleep. In the pitch black of the middle of the night you could never be too sure there wasn’t anyone around you while you went to the bathroom.
Did I walk enough steps away from camp?
Could someone, embarrassingly, still hear me as I did my business?
Is that shadow moving?
Is it coming towards me?
Oh no it’s just a random shrub…. Is it moving?
These were all thoughts I had during a middle of the night bathroom break. But. I survived and the rough night meant I could wake up extra early to see the sunrise.

As the sun rose over the desert. A beautiful silence fell over the entire campsite. Nothing was moving. Nothing was making noise. Just the sounds of the flames of the crater. What. An. Experience.

After a desert breakfast it was time to hit the road. But not before one last look at the gas crater.

And we were off for a 4 hour drive in the desert to our final destination, Ashgabat.

Subscribe below to keep up to date with the final part of this journey. Or you can follow me on instagram @my100by40 for more travel pics, stories and info.

3 thoughts on “Three Weeks in Central Asia (Part 12): Turkmenistan – The Journey to the Gates of Hell…”